One of the places we visited while in Brittany was Carnac, the home of many standing stones.

There are more than 3,000 prehistoric standing stones, although I made no attempt to count them while we were there. I am just amazed at the sheer scale of the site.  I can get my head around the idea of a few stones, eg. Stonehenge but the number here was a little hard to grasp.

The locals believe that the long lines of stones represent a legion of Roman soldiers turned to stone.  This is obviously a modern interpretation as the stones were probably erected around 3300BC!

The site consist of alignments, dolmen, tumuli and menhirs.

We spent a considerable part of the day here.  We walked around almost all of the site. We were there before the season had opened and so the fenced in area was not in operation.  To enter that part you are accompanied by a guide and have to pay for admission.  I really don’t think you would see much more by entering the site. 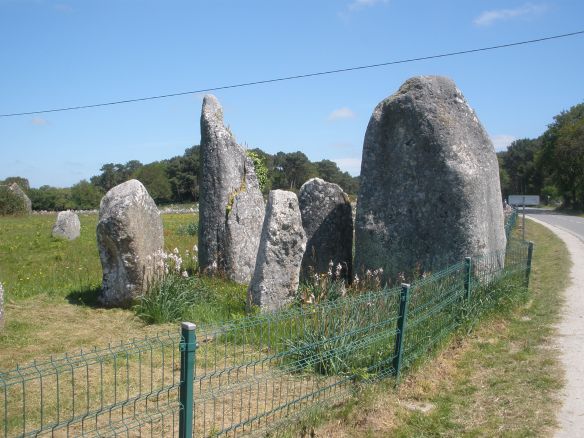 There is also a tourist information centre, prehistory museum and shop at the entrance to the site.