One of the prettiest towns we visited in Brittany was Dinan, in fact we visited it twice.  My husband and I visited it on our own the first time and the second time was with our son and second daughter. They were only with us for a few days in Brittany and this is one of the places we took them to.

The town is full of cobbled streets and half timbered houses and the old part of the town still has the ramparts upon which you can walk and get some stunning views.

I love the use of window boxes in France, you don’t see them very often in Australia.

The photo above is the Rue Jerzual which leads down to the port.  This street has many arts and crafts shops as well as cafés. 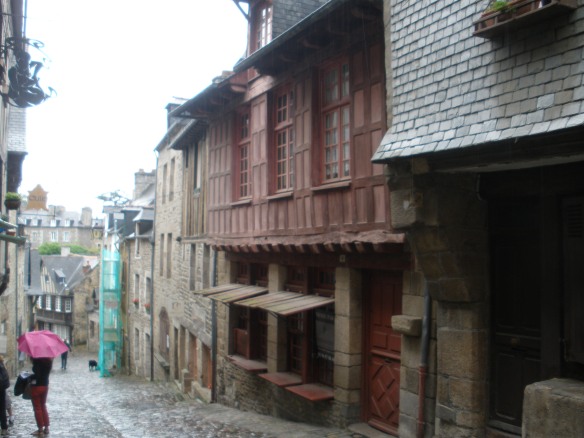 I bought a lovely pair of earrings here. It was at the bottom of this street where I bought Far aux pruneaux mentioned in a previous post.

When we reached the port we spied some schoolchildren who were obviously on some sort of school camp.  There was one teacher to about 18 children and he was teaching them the finer points of kayaking. It was a delight to watch.  You can see from the photo that the weather was nothing to write home about, in fact it rained for the most part of the day, that was on our first visit.  The weather was kinder on our second visit.

The ramparts in the older part of the town give you an excellent vantage point to view the surrounding countryside.

We walked across to the middle of the viaduct to take the next photo of the port.

While we were in Dinan with our son and daughter we had a delicious lunch and took the opportunity to take a photo of how the cider is served in Brittany.

Here I might add that the cider in Brittany is delightful.  I tried many varieties while we were there and enjoyed most of them, one or two were a bit too sweet for me. 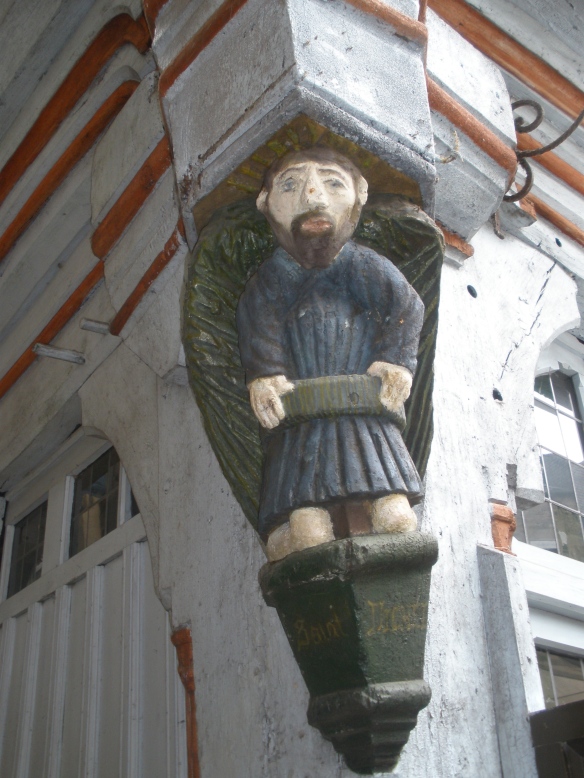 An example of the fine carving on some of the wooden buildings.

On our second visit we went to the musuem and some other parts of town but I will save that for another post.