A visit to another beautiful village in Brittany.  This lovely little village is well known in Brittany for the proliferation of artists who live or used to live in the vicinity and have used picturesque Pont-Aven as their source of inspiration.  The most famous of the artists is Paul Gauguin. 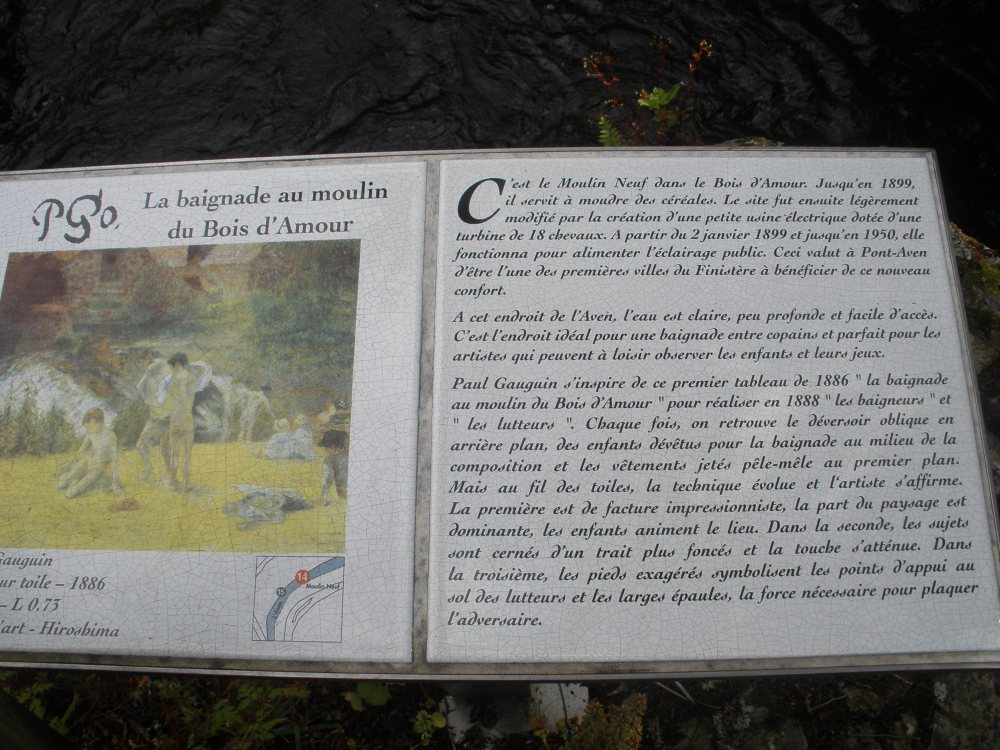 At the various sites which were used for inspiration you will find these informative plaques. 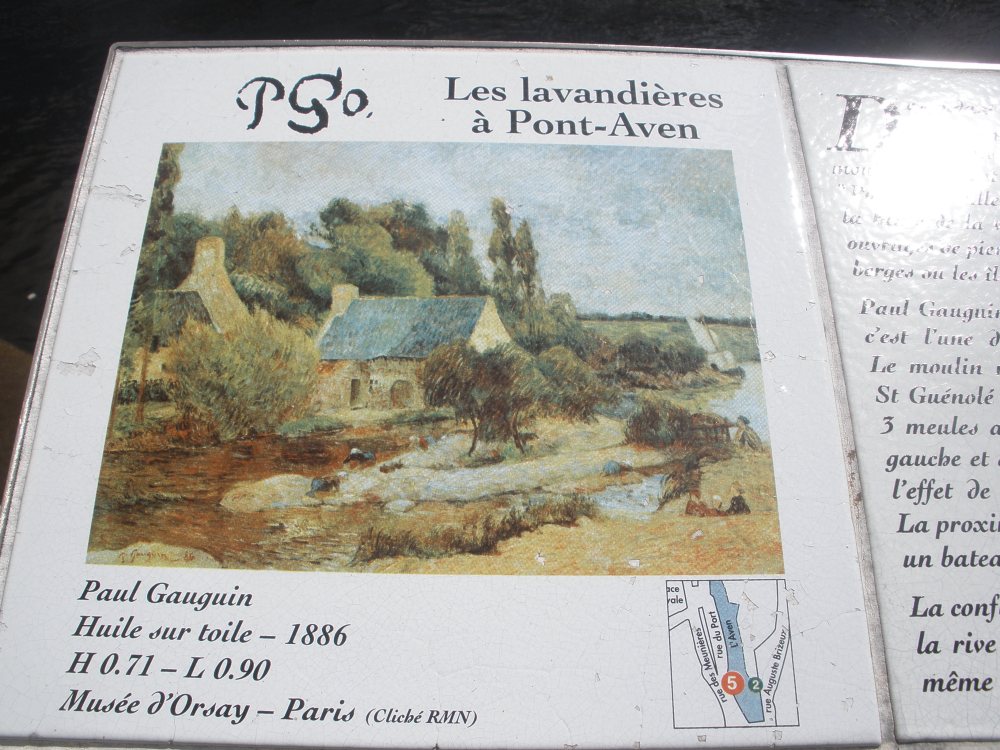 Until the mid-19th century, Pont-Aven, named after the river that runs through it, was known for its mills and its port. With the advent of the railways along came tourism and in the 1860s some American painters discovered the village. Word spread throughout the artistic community about its merits and in 1886 Paul Gauguin arrived for the first of several stays; in 1888 he met fellow artist Émile Bernard and the École de Pont-Aven art movement, which focused on colour and symbolism, was born. (from Tourisme Bretagne) 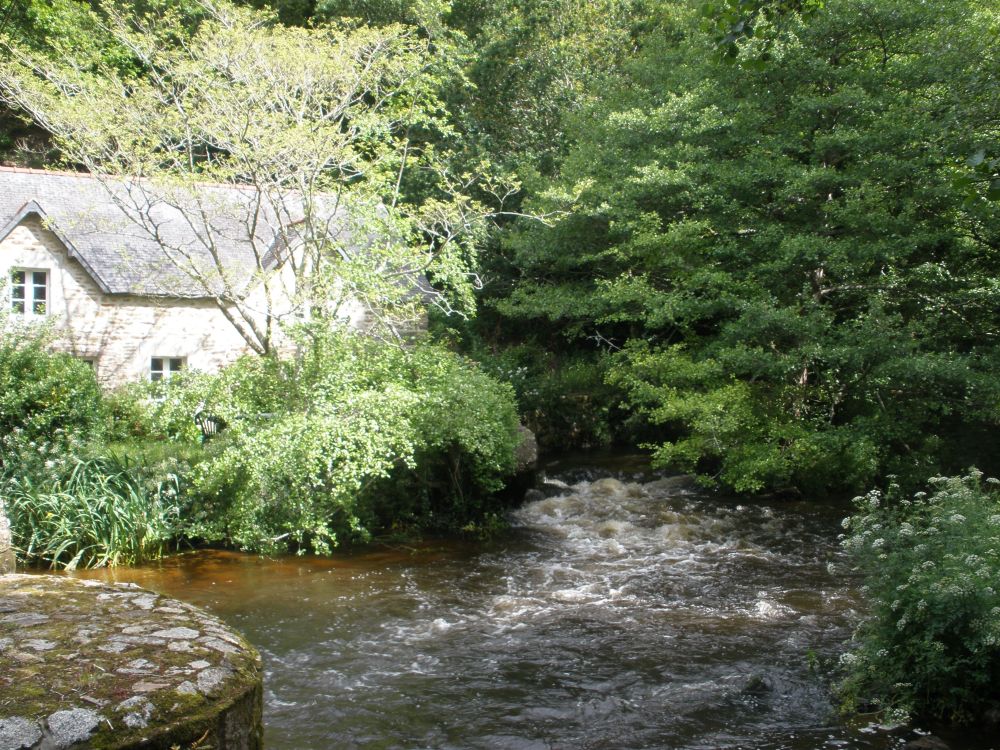 When we arrived at the town we parked at the outskirts and followed the path along the river into the centre of town.  We didn’t realise that we had stumbled upon the Promenade Xavier Grall, which runs alongside the river.

There is also a Promenade des Moulins, a trail around the remains of the village’s 15 watermills; they were concentrated here because of the Aven’s natural barrages in the form of huge granite boulders, which made the flow of water easier to control. (from Tourisme Bretagne)

Some of the mill buildings still retain their wheels but only the Moulin Poulguin, is still capable of operating. The mill is now a restaurant and you can see the machinery inside. 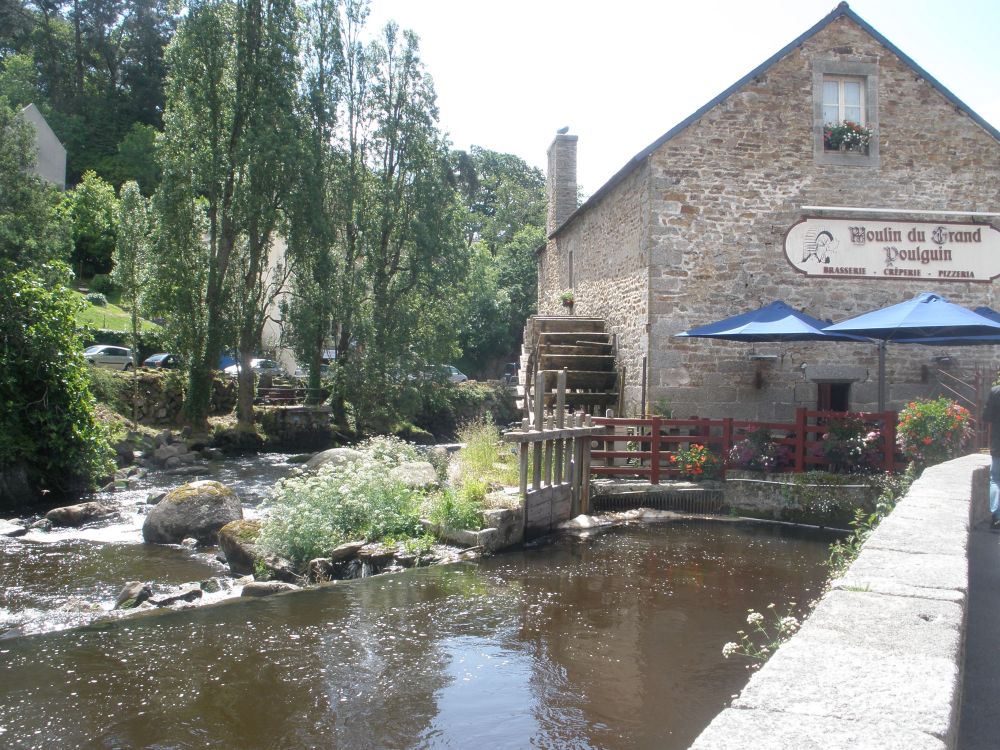 Pont-Aven has many art galleries and some very nice clothes and food shops and while we were there we bought some galettes from Biscuiterie Traou Mad, where these butter biscuits  were invented in 1890.  In the culinary world, Pont Aven is a designated “Site of Exceptional Culinary Taste” for being the delicious epicurean land of melt-in-your-mouth butter cookies – les galettes et les sablés beurrés.

We didn’t eat at one of the many restaurants but bought a baguette for lunch and ate it down by the riverside.  Delightful.

Pont Aven still attracts artists and art lovers and there is a School of Contemporary Art situated here.