The town’s main claim to fame is that it played a significant part in the Normandy landings because this village stood right in the middle of route N13, which the Germans would have most likely used on any significant counterattack on the troops landing on Utah and Omaha Beaches. In the early morning of 6 June 1944 mixed units of the U.S. 82nd Airborne and U.S.101st Airborne Divisions occupied the town in Operation Boston, giving it the claim to be one of the first towns liberated in the invasion. (Wikipedia) 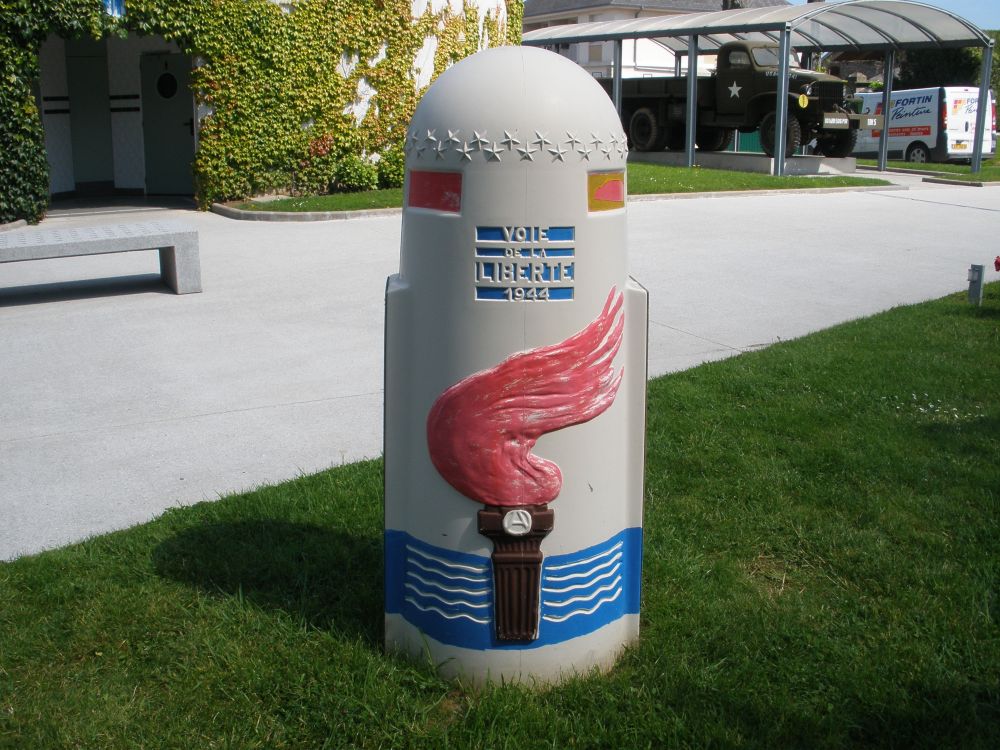 This is the first marker of the Voie de la liberté which is the commemorative way marking the victorious route of the Allied Forces from D-Day in June 1944. It starts outside the Town Hall in Sainte-Mère-Église travels across Northern France to Metz and then northwards to end in Bastogne, on the border of Luxembourg and Belgium. At each of the 1,146 kilometres, there is a stone marker or ‘Borne’.  We had seen the markers on our travels but it was only when we went to the Airborne Forces Museum in Sainte-Mère-Église that we got the full story.
My brother and his wife have been to France many times and my brother, who is a great raconteur, has told us some wonderful stories about their trips overseas. One of the stories he had told us was about John Steele, the American paratrooper who got caught on the church steeple in Sainte-Mère-Église during World War 2. 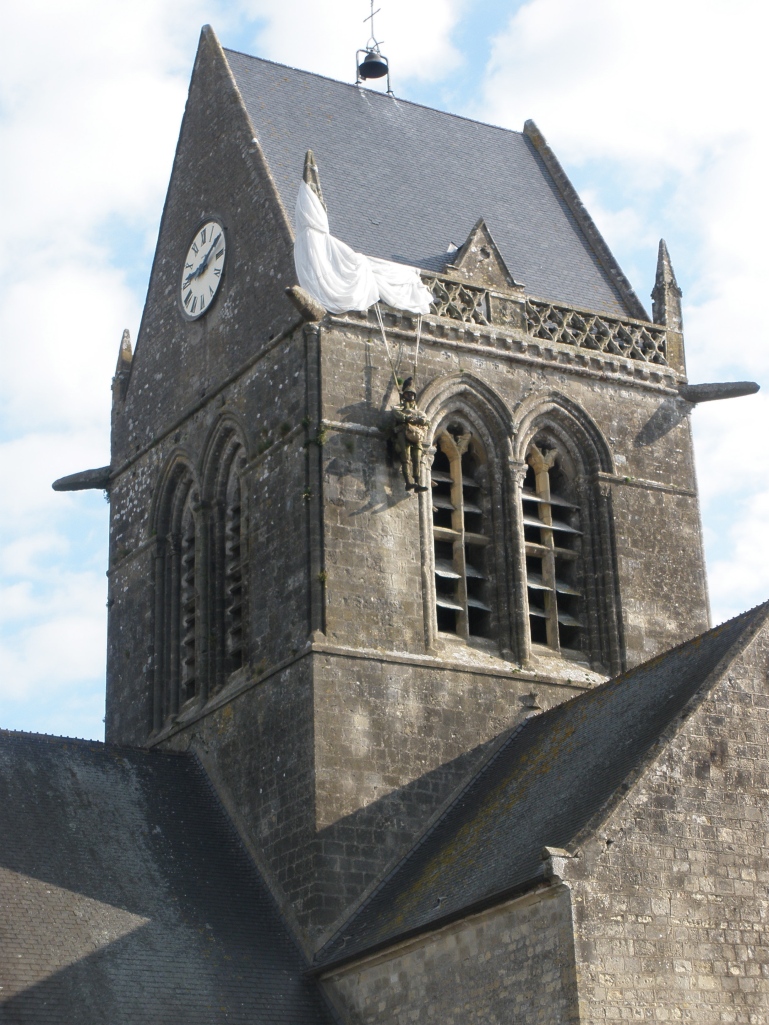 On our trip to France we were fortunate enough to visit  and find out for ourselves the story behind John Steele.

Private John Steele, famous for his landing on the church steeple in Sainte-Mere-Eglise on June 6, 1944, was part of a group of paratroopers from F-Company, 505 Parachute Infantry Regiment that had the misfortune of landing in the town square of Sainte-Mère-Église, France in the early morning hours of June 6th 1944.  Sainte-Mère-Église was the first town liberated in Europe as the Allies landed on D-Day.

In the early hours of D-Day, the 505 Parachute Infantry Regiment of 82nd. Airborne Division was assigned to drop near the town of Sainte-Mère-Église, to cut off the German retreat from the beachhead landings. This was some five to six hours before the beach landings of the allied forces. The orders had been changed twice due to a great concentration of German troops and uncertain weather conditions and Steele found himself landing directly over a town of German infantry. He was shot in the foot as his parachute lines fouled on the church steeple. He dropped his knife trying to cut his way out and decided he might survive if he played dead. He was cut down by the Germans and some hours later and taken to an aid station.

Twelve men of F-Company were killed, wounded or captured as they parachuted into the town square while Private Steele watched while he hung from the church steeple. (505th Regimental Combat Team website)

Steele later escaped from the Germans and rejoined his division when US troops of the 3rd Battalion, 505 Parachute Infantry Regiment attacked the village, capturing thirty Germans and killing another eleven. The incident was portrayed in the movie The Longest Day.

The Airborne Forces Museum was opened in 1964 and has gradually been extended over the years. 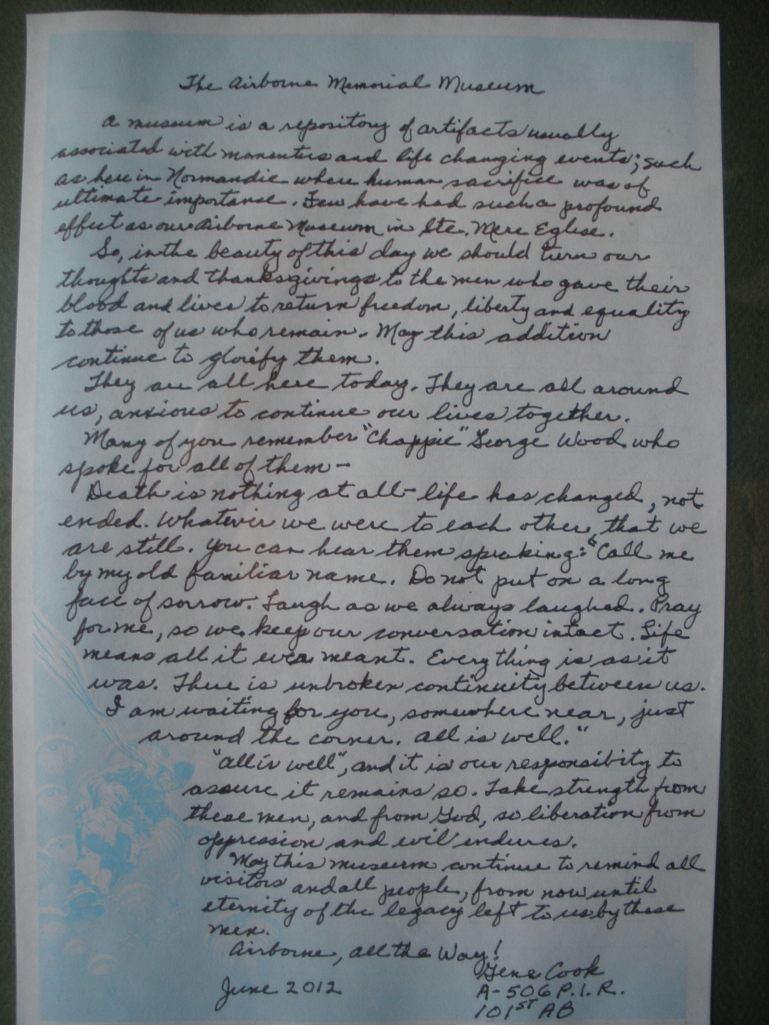 It has buildings which are designed to look like billowing parachutes. 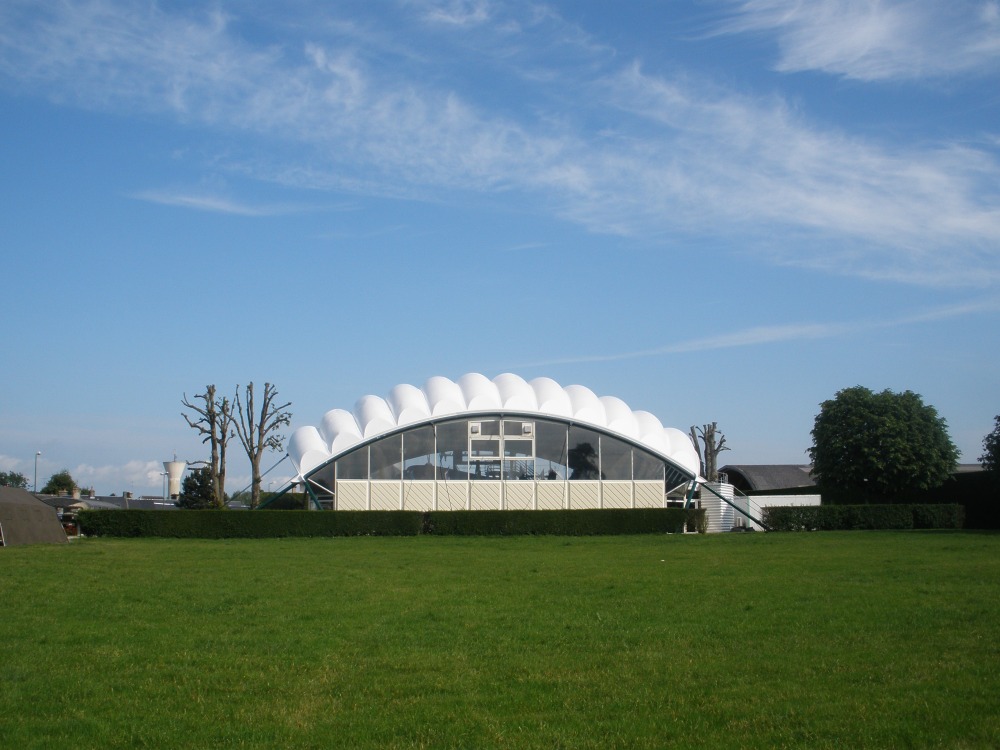 and has a glider in the field behind, lying where it landed. 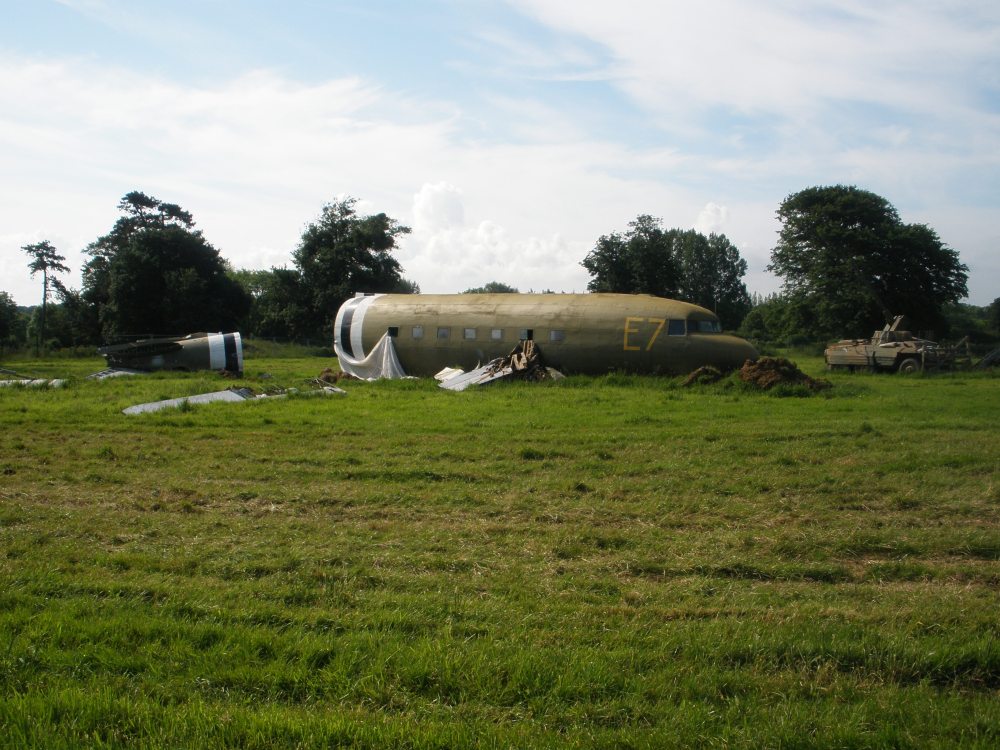 We spent quite some time in the museum as the exhibits are well presented and there is a great deal of information to read. 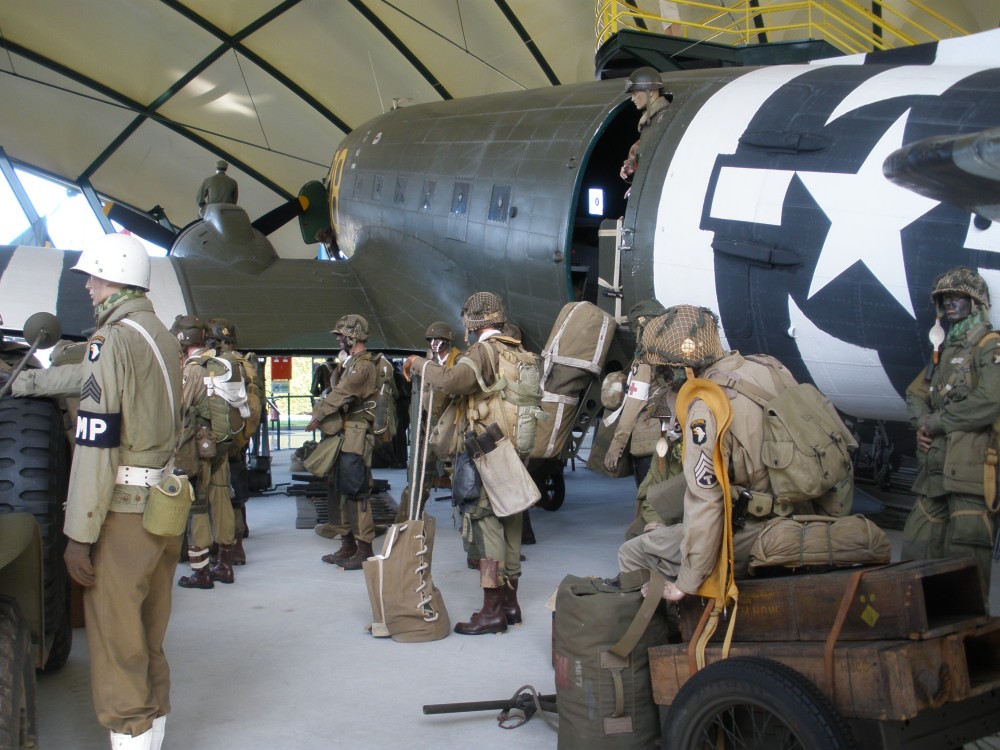 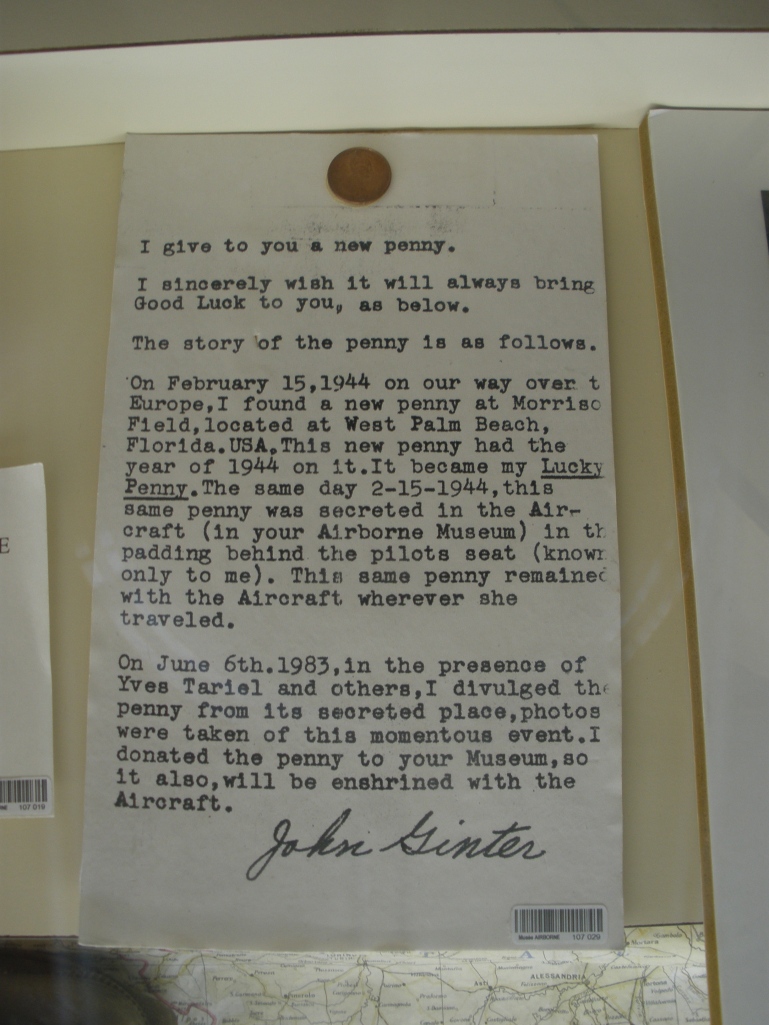 After visiting the museum we wandered through the town and went into the town hall and viewed the exhibits there too.  The town has plaques on some of the streets showing what the street looked like at the time of the D Day invasion so you can compare with the present day.

A wonderful place to visit and well worth taking the time to go there.