Scrublands is a quintessential Australian novel. 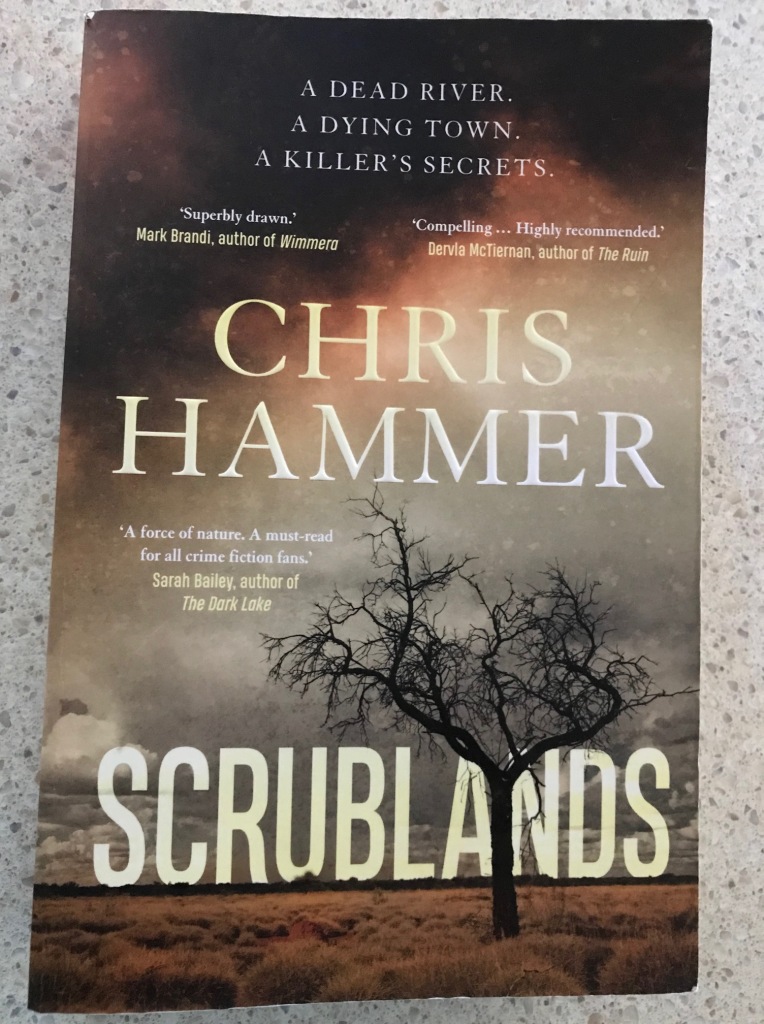 I loved this book.

This review by Sue Turnball in the Sydney Morning Herald says all that needs to be said about the novel.

“Scrublands is the epic novel about rural life in Australia that we need right now. In its concern with crime beyond the suburban fringe, it sits right up there with the late Peter Temple’s Broken Shore, Garry Disher’s Bitterwash Road and Jane Harper’s The Dry, even as it extends their focus and reach.

What former journalist and foreign correspondent Chris Hammer has given us is nothing more nor less than the ethnography of a dying town where the op-shop with its window full of dead men’s shoes is only open Tuesday and Thursday, the hotel has closed down for lack of business, and the only place to stay is the Black Dog Motel, “no pets allowed”.

This level of observational detail is hardly surprising given Hammer is the author of The River, a prize-winning non-fiction account of life in the Murray-Darling basin during the millennium drought. He’s done the background research and now woven it into a crime novel that slowly unwraps the layers of complexity that constitute the tightly woven Riversend, a fictional but completely recognisable rural town that is “circling the wagons against drought and economic decline” as the biker gang roars through.. . . . . Scrublands is a rural crime novel with remarkable breadth and depth that would also make a superb TV series.”

From the book cover:

“In Riversend, an isolated rural community afflicted by an endless drought, a young priest does the unthinkable, killing five parishioners before being taken down himself.

A year later, accompanied by his own demons from war-time reporting, journalist Martin Scarsden arrives in Riversend. His assignment is simple: describe how the townspeople are coping as the anniversary of their tragedy approaches. But as Martin meets the locals and hears their version of events, he begins to realize that the accepted wisdom—that the priest was a pedophile whose imminent exposure was the catalyst for the shooting, a theory established through an award-winning investigation by Martin’s own newspaper—may be wrong.

Just as Martin believes he’s making headway, a new development rocks the town. The bodies of two German backpackers—missing since the time of the church shootings—are discovered in a dam in the scrublands, deserted backwoods marked by forest fires. As the media flocks to the scene, Martin finds himself thrown into a whole new mystery.

What was the real reason behind the priest’s shooting spree? And how does it connect to the backpacker murders, if at all? Martin struggles to uncover the town’s dark secrets, putting his job, his mental state, and his life at risk as more and more strange happenings escalate around him.”