I must have been living under a rock as I was unaware that J.K.Rowling was the author Robert Galbraith.

I had borrowed Lethal White from the library 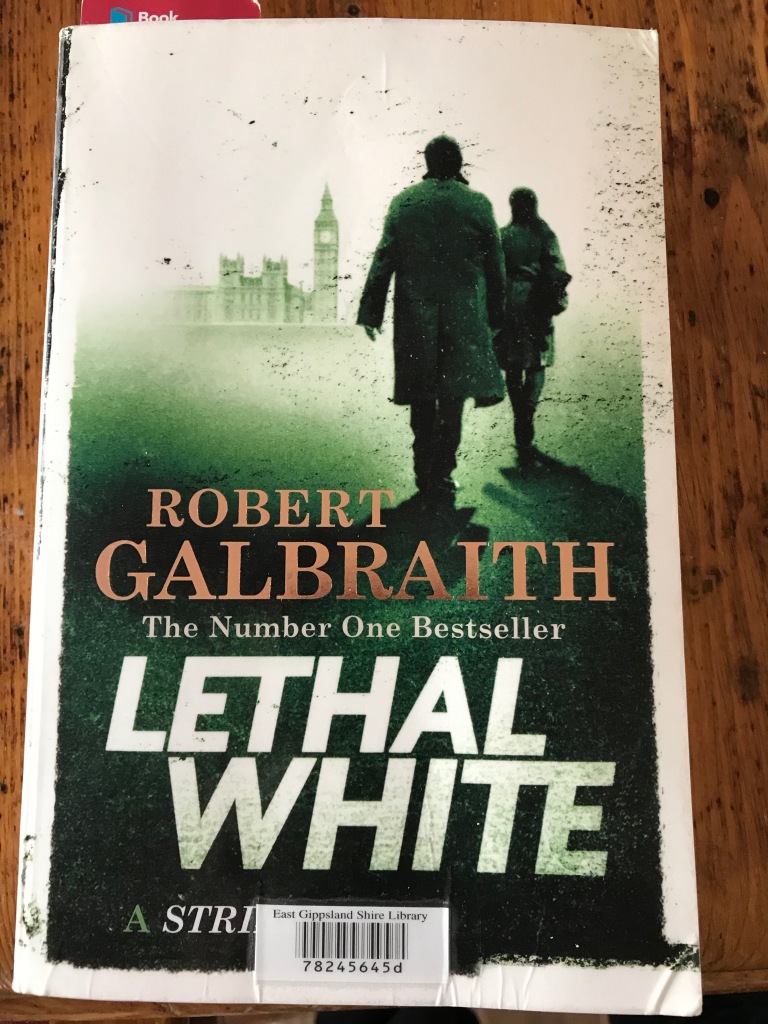 and had started to read it when a friend told me that she had the first three books in the series.  I had been reading thinking it was a stand alone book, which indeed it could be.  Nevertheless I stopped reading it and borrowed two of the first books from my friend and the books are The Cuckoo’s Calling and The Silkworm.

The Cuckoo’s Calling was perfect as it introduced the characters of the book I had started to read and it futher expanded on what I had read in Lethal White.  I quickly read both of these books and couldn’t wait to borrow the third but in the meantime I continued reading Lethal White.

“When a troubled model falls to her death from a snow-covered Mayfair balcony, it is assumed that she has committed suicide. However, her brother has his doubts, and calls in private investigator Cormoran Strike to look into the case.

Strike is a war veteran – wounded both physically and psychologically – and his life is in disarray. The case gives him a financial lifeline, but it comes at a personal cost: the more he delves into the young model’s complex world, the darker things get – and the closer he gets to terrible danger . . .

A gripping, elegant mystery steeped in the atmosphere of London – from the hushed streets of Mayfair to the backstreet pubs of the East End to the bustle of Soho.”

“A compulsively readable crime novel with twists at every turn, The Silkworm is the second in the highly acclaimed series featuring Cormoran Strike and his determined young assistant Robin Ellacott.

When novelist Owen Quine goes missing, his wife calls in private detective Cormoran Strike. At first, she just thinks he has gone off by himself for a few days – as he has done before – and she wants Strike to find him and bring him home.

But as Strike investigates, it becomes clear that there is more to Quine’s disappearance than his wife realises. The novelist has just completed a manuscript featuring poisonous pen-portraits of almost everyone he knows. If the novel were published it would ruin lives – so there are a lot of people who might want to silence him.

And when Quine is found brutally murdered in bizarre circumstances, it becomes a race against time to understand the motivation of a ruthless killer, a killer unlike any he has encountered before…”

The books are now a TV series and you can view trailer for the series at the following link.